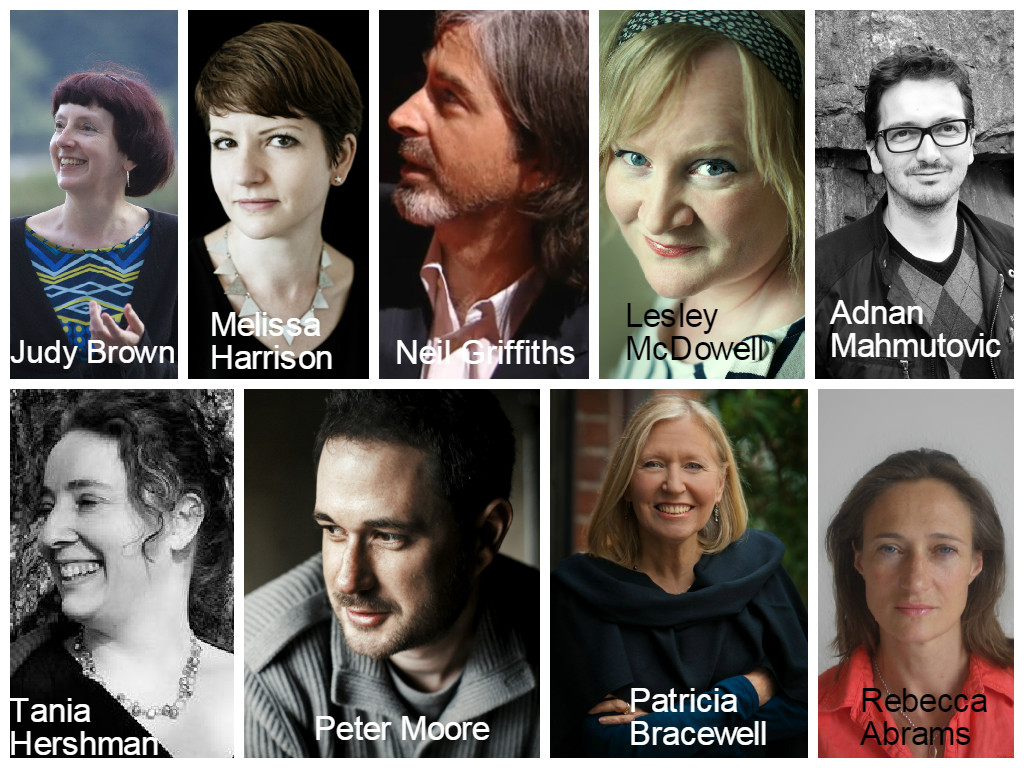 Judy Brown was the winner of the Manchester Poetry Prize (2010), the Poetry London Competition (2009) and the Hamish Canham Poetry Prize (2005). Judy was also Poet in Residence at the Wordsworth Trust for 2013. Her collection of poetry, Loudness (Seren, 2011), was shortlisted for the 2011 Forward/Felix Dennis award and in the Fenton Aldeburgh prizes for best first collection in 2012. Her pamphlet, Pillars of Salt (Templar, 2006), won Templar Poetry’s pamphlet competition and her poems have appeared in several newspapers and magazines such as the Guardian, Poetry Review, Poetry Ireland Review, Poetry London, The Spectator and the New Statesman as well as in a range of anthologies.

"It’s impossible to overstate the value of my month at Gladstone’s Library. It offered the perfect combination of safety and discovery. The Library is a wonderful place run by wonderful people where you find some precious things: time to write and study; much inspiration; unfailing kindness; good conversation when you need it; and a careful delicacy which allows you to work as you choose. Pleasure is rarely so unmixed!"

Click here to read a Q&A with Judy about her residency.

Lesley McDowell was our Writer in Residence for May 2014, and is an author and critic living in Scotland. She earned a PhD for work on James Joyce and feminist theory before turning to literary journalism. Lesley has written fiction, The Picnic (Black and White, 2007) and her second book, Between the Sheets (Overlook Press, 2010) was shortlisted for the Scottish Book Awards 2011 (non-fiction). Her third book and second novel, Unfashioned Creatures was published in November 2013.

"The month I spent at Gladstone’s was one of the best experiences of my life. The people working there were always friendly but never crowded me. The library was both a haven and a useful resource, and the setting of the library was a surprise, too – it wasn’t as isolated as I thought, whilst also surrounded by beautiful countryside. I also thought it was a particularly woman-friendly space. It may be ‘Gladstone’s’, but often older buildings like this are swamped with pictures of elder statesmen that can make women feel as though they shouldn’t be there, or that they’re breaking into some male citadel! But Gladstone’s didn’t feel like that at all to me. I felt as though I had a right to be there, and that the library thought I had, too!"

Click here to read a Q&A with Lesley about her residency.

Peter Moore (March 2014), is a visiting lecturer at City University and writer of historical fiction. His debut novel, Damn His Blood (Chatto & Windus, 2012) which explores the dark murder of a Reverend in the early 19th Century, has been described as channelling Hardy in its cast of characters and expertly weaves the truth of the past into a gleefully twisted, bloody and thrilling fiction. Peter’s writing has been featured on BBC Radio 4 and he has written articles for the Guardian.

Writer in Residence at Gladstone’s Library for February 2014 was Rebecca Abrams. Rebecca is a columnist and author of Touching Distance (for which she was shortlisted for the 2009 McKitterick Prize and won the 2009 Medical Journalists’ Association Award for Fiction) and several successful non-fiction titles including: Three Shoes, One Sock & No Hairbrush, a guide for second-time parents; The Playful Self: Why Women Need Play in their Lives, Woman In A Man’s World and the critically acclaimed When Parents Die (shortlisted for the MIND award).

"My time as a Gladstone’s Library Writer in Residence was hugely important. It came at a very difficult time in my life when I was struggling to make progress with my writing. The residency gave me everything I’d hoped for and more - a quiet, comfortable retreat where I could work as many hours each day as I wanted in a lovely environment without interruption and completely free from domestic chores. The library itself was a beautiful and inspiring place to read and write, and the rolling countryside around Hawarden was great for walking off the cobwebs - and the lunches! I also really enjoyed the company of the other writers and researchers I met during my residency. The lively discussions over supper about everything from plot structure and characterisation to the correct way to cut cheese were a pleasure all of their own."

Melissa Harrison (Writer in Residence at Gladstone’s Library 31st January – 14th February 2014), is a writer, photographer and winner of the 2010 John Muir Trust’s Wild Writing Award. Her debut novel, Clay (Bloomsbury, 2013), was chosen for Amazon’s Rising Stars programme and shortlisted for the Portsmouth First Fiction award. The novel explores the balance of life within a city and deconstructs binary opposites such as young and old, nature and development and recklessness and caution. Melissa also contributes to The Times’ weekly Nature Notebook column, reviews books for the Weekend FT and Slightly Foxed, and writes about urban wildlife at www.talesofthecity.co.uk. Melissa’s second novel, At Hawthorn Time, was published by Bloomsbury in April 2015.

"At first, I hesitated to apply for the residency because at that early stage in my career I didn't yet feel like a "proper writer"; I wasn't sure if the Library would be full of "proper writers" and academics, and whether I'd fit in. I'm so glad I did, though: there were all sorts of people there, and I felt welcome straight away. I got a huge amount of writing done, and three years later I visit often and still consider Gladstone's my home-from-home."

Patricia Bracewell (Writer in Residence at Gladstone’s Library from 27th October – 10th November 2014) is a Californian born author and the author of historical fiction debut Shadow on the Crown (Viking Adult, 2013). Based on real events and as the first instalment of a trilogy, Shadow on the Crown delves into the lives of Emma of Normandy and King Æthelred the Unready and introduces readers to a previously unexplored chapter of English history. The sequel, The Price of Blood, was released in 2015.

"I had my doubts about my qualifications, to be sure. What were the chances of someone like me, a debut author with, at the time, only one book in print, being considered for such a prestigious award? Aside from that, I did not even know if Americans were eligible. (Upon inquiring, I learned that Americans would be most welcome.)"

Click here to read a Q&A with Patricia about her residency.

Neil Griffiths was a Writer in Residence at Gladstone’s Library from 27th January to 10th February 2014. Neil is the author of two novels. His debut novel, Betrayal in Naples (Penguin) was the winner of the Authors' Club Best First Novel, and his second, Saving Caravaggio (Penguin), was shortlisted for the Costa Novel of the Year.

Tania Hershman is the author of two story collections: My Mother Was An Upright Piano: Fictions (Tangent Books, 2012), and The White Road and Other Stories (Salt, 2008; commended, 2009 Orange Award for New Writers). Tania's award-winning short stories and poetry have been widely published in print and online and broadcast on BBC Radio 3 and Radio 4. Tania was a 2014 Gladstone's Library Writer in Residence, judge of the 2014 Bridport Flash Fiction Prize, and founder and curator of ShortStops (www.shortstops.info): a website celebrating short story activity across the UK & Ireland. Tania is also the founding editor of The Short Review, an online journal spotlighting short story collections. In 2014 Tania became the Royal Literary Fund fellow at Bristol University and she is currently studying for a PhD in Creative Writing at Bath Spa University, exploring the intersection between fiction and particle physics. She is co-writer of the Writers and Artists Book of the Short Story, which was published by Bloomsbury in December 2014.

Adnan Mahmutovic was a Writer in Residence at Gladstone’s Library from 20th January to 3rd February 2014. Adnan was formerly a Bosnian war refugee, and is now a lecturer and Writer in Residence at the Department of English at Stockholm University. His fiction explores contemporary European history and the issues of identity and home for Bosnian refugees.  His work includes: short fiction, How to Fare Well and Stay Fair (Salt, 2012); novel length fiction, Thinner than a Hair (Cinnamon Press, 2010); academic writing, Ways of Being Free (Rodopi, 2012) and film, Guzul.

"For me one of the best things was the way the place affected me. As a writer who is also a refugee I’m drawn to places which feel like home. It’s not something you can plan. In fact, if you carry a fear that no place will feel like home it’s very hard to find one. For this reason, I was so surprised by Gladstone’s Library. I hardly even went for a walk during my residency. I just couldn’t get enough of it."